Revealing the latest title in the popular RPG series by Square Enix and tri-Ace.
The first installment in the Star Ocean series released in 1996, and five mainline games, one spinoff game, and one mobile game have been developed to this day since then. This year marks the 25th anniversary of the series and its latest mainline title – Star Ocean The Divine Force – been announced.
Star Ocean The Divine Force is developed by Square Enix and tri-Ace, and set to release on PlayStation 4 and PlayStation 5 in 2022. The game features a story that blends sci-fi and fantasy, a rich lineup of characters and side stories, a battle system delivering exhilarating combat with easy controls, and more.
The “Double Hero” system returns in which the story spanning the stars and beyond will unfold from the perspective of each protagonist, one from an advanced civilization (sci-fi) and the other from an underdeveloped planet (fantasy). Events that unfold throughout the story as well as the ally characters you end up with will differ based on the protagonist the player chooses.
In this game, there is range of playable characters in addition to the two protagonists, and you can control each of the party members.
A young man from the nonfederated planet of Verguld. He is the captain of the merchant vessel Ydas under Lawrence Logistics, a company run by his family. His confidence often sees him rushing recklessly into situations when it comes to his friends and work, much to the distress of the Ydas crew. Raymond has a big heart, affable nature, and a good nose for business. His lack of affiliation with the Pangalactic Federation means he is not bound by the Underdeveloped Planet Preservation Pact. This sincere openness to meet others where they’re at regardless of technological advancement wins Laeticia over, but leaves Albaird wary. 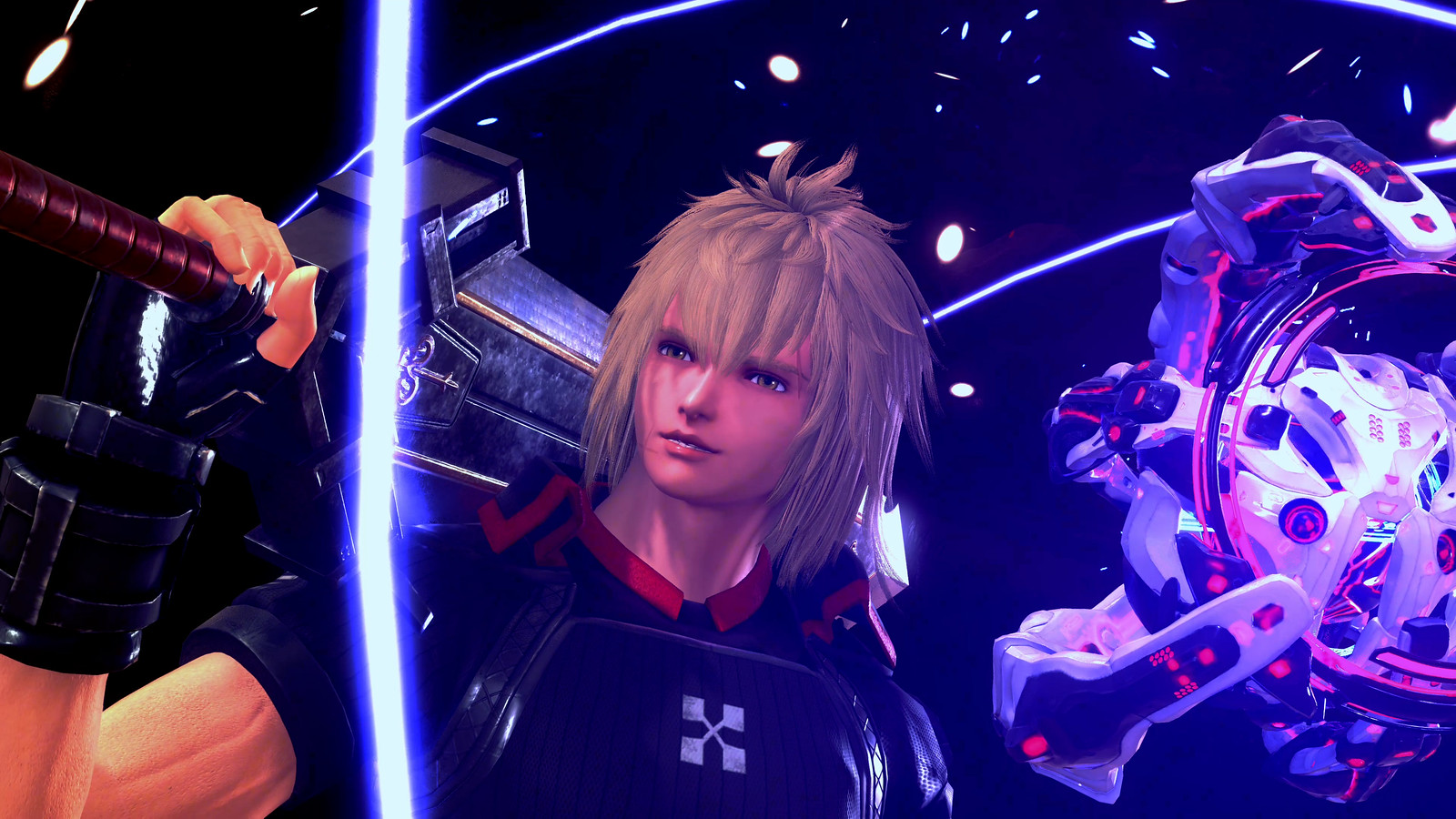 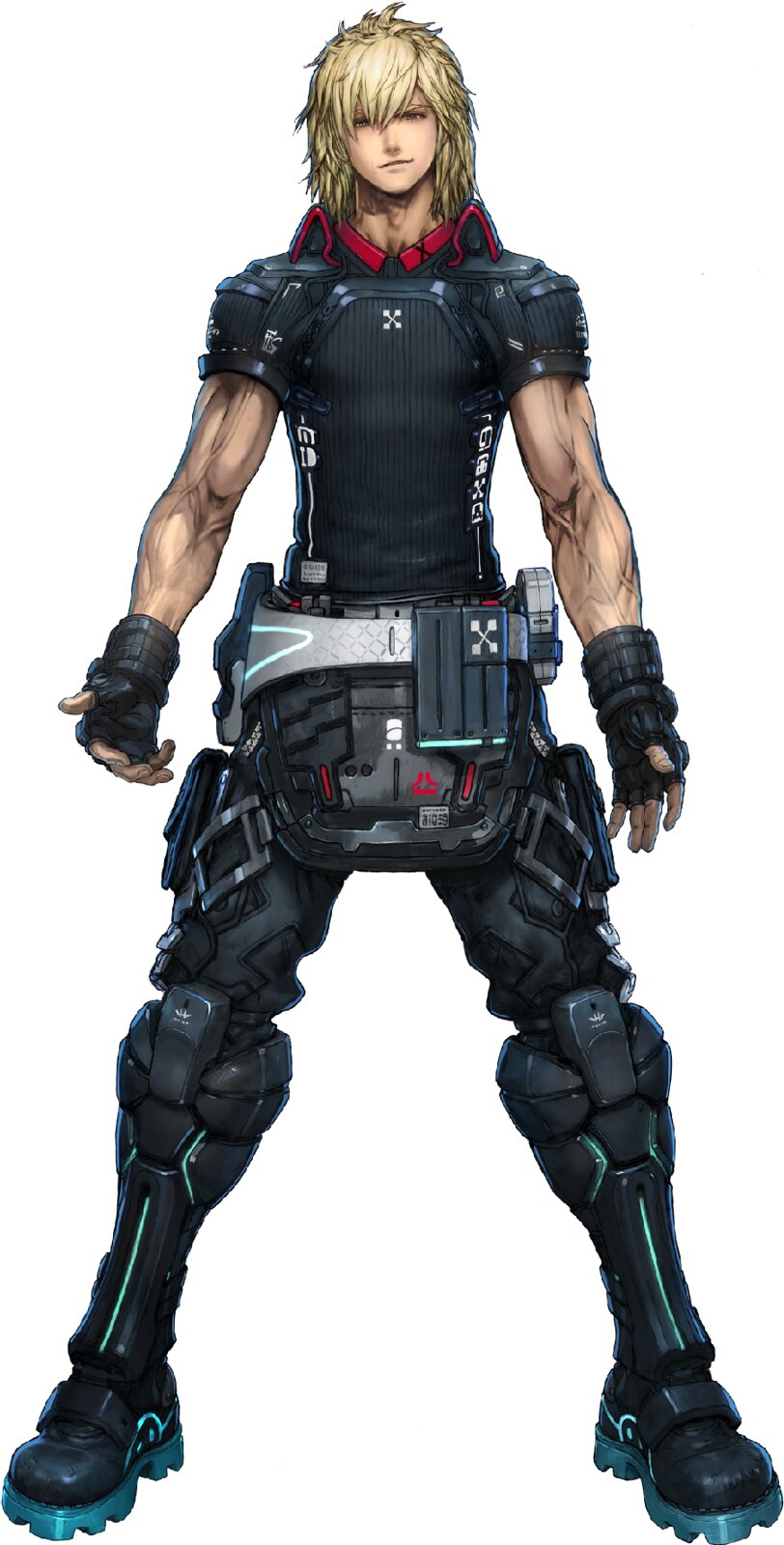 Princess of the Kingdom of Aucerius: a large territory located on the underdeveloped planet of Aster IV. Her radiant and resolute personality is admired throughout the kingdom, but her prim demeanor betrays her penchant for wearing armor and remarkable skill with the dual blades. In order to remedy the encroaching threat of a neighboring country, Laeticia sets off on a secret journey to locate a certain individual. She meets Raymond along the way, recently stranded on Aster IV. The two agree to help one another and begin traveling together. 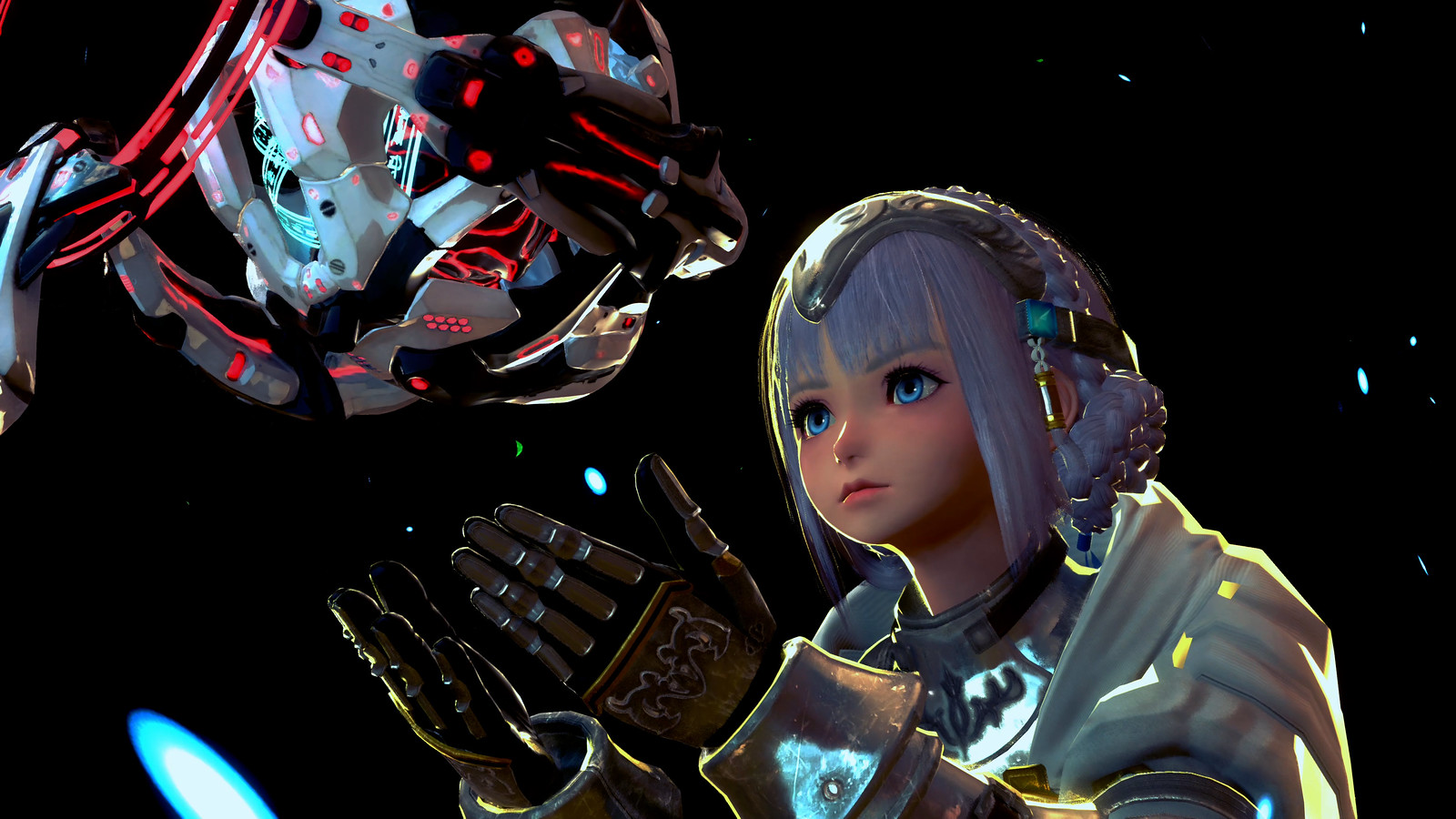 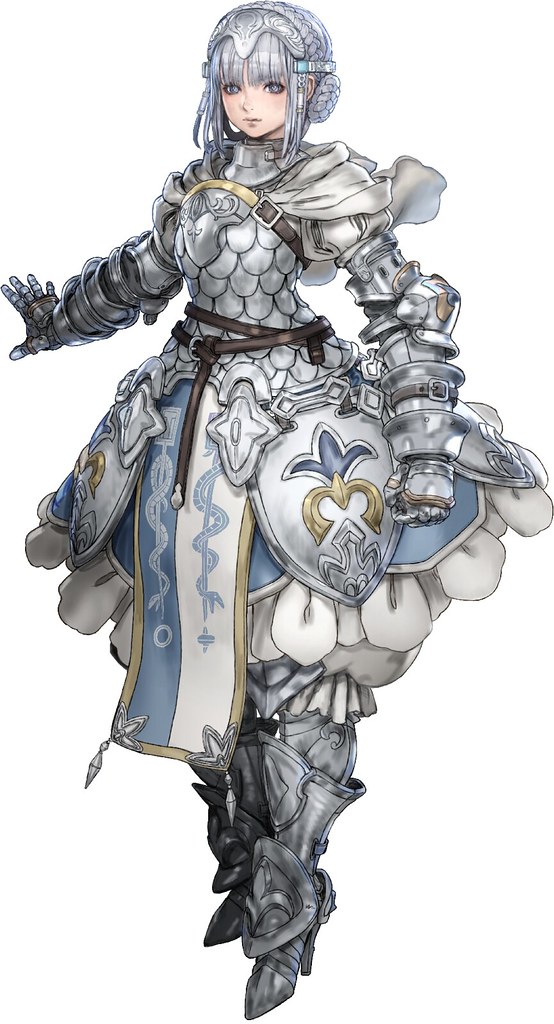 A crew member of the merchant vessel Ydas and Raymond’s first mate. She manages the operation of just about the entirety of the ship, and her vast knowledge and cool demeanor have earned her the complete trust of Raymond and the crew. Elena is constantly surprised by Raymond’s proclivity for recklessness, but all the same she holds a high opinion of his leadership qualities. 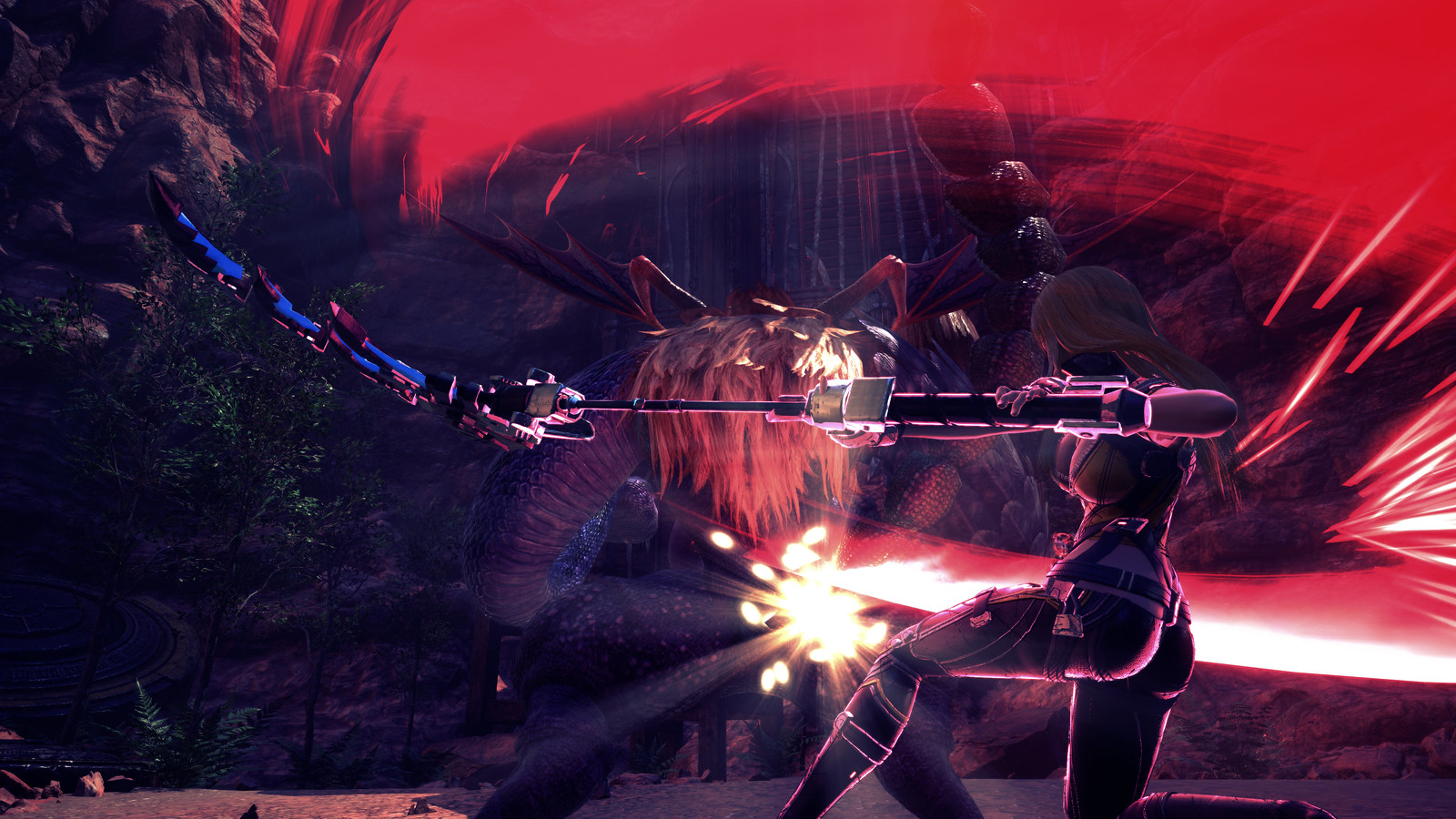 A childhood friend of Laeticia’s, he now serves her as a knight of the Kingdom of Aucerius. He excels at semiomancy and the wielding of chakram. His strong sense of loyalty to Laeticia means he is never far from her side. Albaird’s left arm is covered down to his fingertips, and he occasionally gestures as if to protect it. He does not trust Raymond upon meeting him while escorting Laeticia on her secret journey. Loathe to go against her wishes, however, he reluctantly allows Raymond to join them. 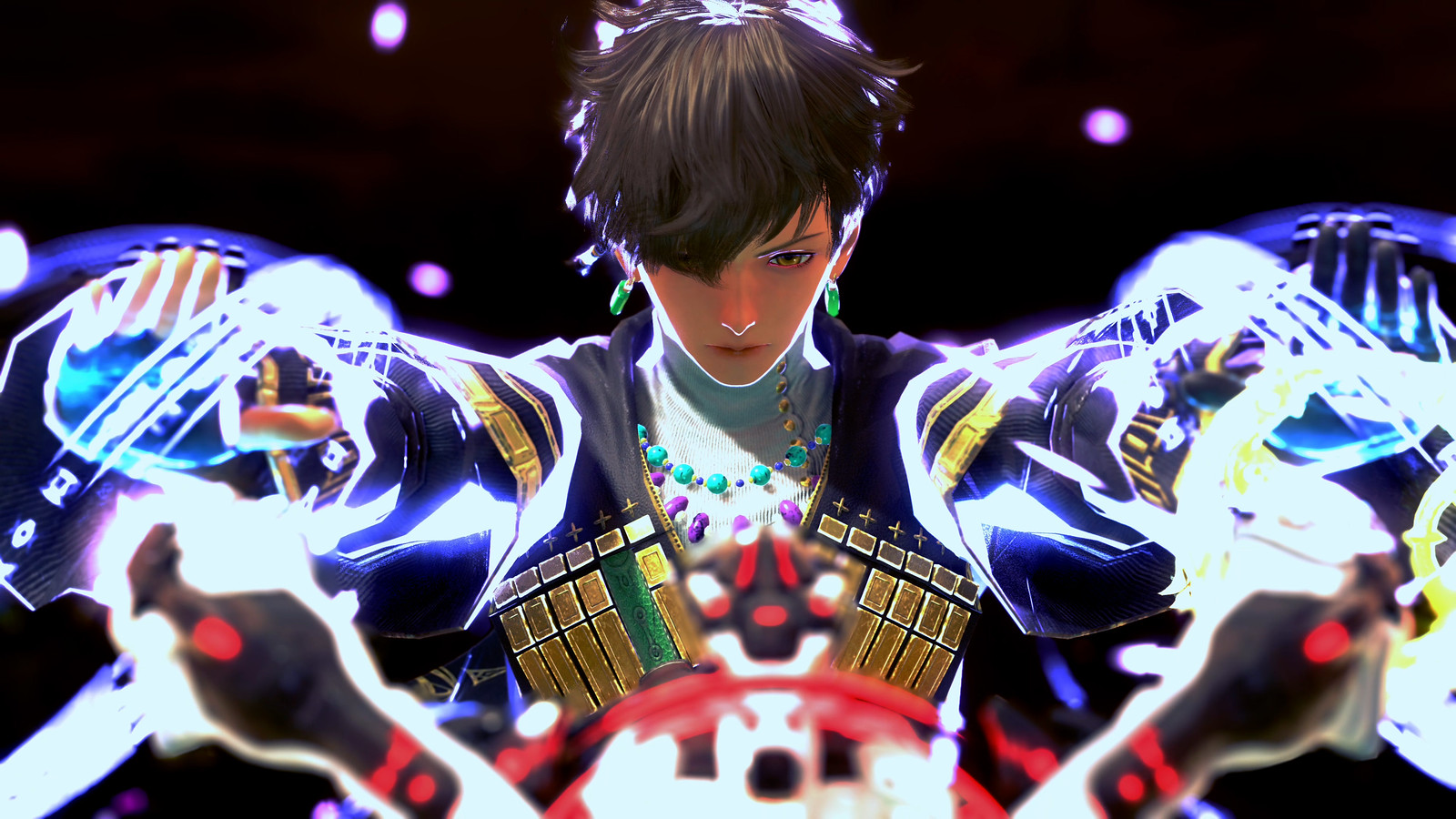 It’s Thursday, GTA fans, and you know what that means. GTA Online‘s weekly update is here, and while Rockstar Games hasn’t put the official notes on the Newswire just yet, players have dipped into Los Santos to see what’s new this week.
The significant new addition this time is a fresh set of wheels. The Obey I-Wagen is now available to purchase from Southern San Andreas Super Autos for $1,720,000 in-game currency. Rockstar introduced the electric four-door mid-size crossover SUV to GTA Online as part of The Contract update, so you may have seen it already if you’ve been doing some work for Franklin.
If you’re looking to raise some dosh this week, though, you’ll want to keep an eye out for Simeon’s contact missions as they’re paying out triple the usual rewards. Meanwhile, the South Central Leak investigation mission and Hardest Target adversary mode pay double the bonuses if you fancy a change of pace. The former is one of the missions from The Contract update, while the latter is a two-team mode where one member from each team starts with more armour.
This week, the GTA podium car is the Declasse Drift Tampa, while the GTA Prize Ride is the Karin Calico GTF, which you can snag by placing first in pursuit races for five days in a row.
Here are all of the discounts:
40% Off
– Itali GTB ($713,400)
– Itali GTB Custom ($297,000)
– Vectre ($1,249,500 – $937,125)
30% Off
– Stun Gun ($262,500)
– Compact EMP Launcher ($278,250)
Misc
– Old & New Music available on Radio Los Santos & West Coast Classics#GTAOnline
— Tez2 (@TezFunz2) January 20, 2022

For more open-world PC games, you can follow that link.
Get involved in the conversation by heading over to our Facebook and Instagram pages. To stay up to date with the latest PC gaming guides, news, and reviews, follow PCGamesN on Twitter and Steam News Hub, or download our free app for Overwolf.
Iain Harris Deputy news editor
Published: Jan 20, 2022
When not wrangling the news, Iain can be found tootling through Eorzea searching for Final Fantasy XIV’s hottest new looks. Has bylines all over, including: Kotaku, Rock Paper Shotgun, Esports News UK, VG24/7, and PocketGamer.Biz. Please don’t ask him how much he spent to get Xiao in Genshin Impact.

A brand new entry of Intel’s flagship ARC Alchemist Gaming graphics card has been spotted within the SiSoftware Sandra database.
The Intel ARC Alchemist graphics cards for desktop PCs are scheduled for a launch in the coming months. Despite being so close to launch, Intel hasn’t shared a lot of info regarding product specs, names, and performance although they had several opportunities to do so with the most recent one being CES 2022. Instead, Intel decided to announce that 50+ desktop and notebook systems from its partners will be ready for launch.
Intel warns users to NOT overclock their non-K Alder Lake CPUs, cites “Damaging”
With that said, a brand new entry of Intel’s flagship ARC Alchemist graphics card based on the Xe-HPG architecture has been leaked within the SiSoftware Sandra database. The new entry is for the 32 Xe SKU (DG2-512) which features 4096 ALUs and a clock speed of up to 2.10 GHz. There’s also 4 MB of L2 cache and the GPU most likely features 16 GB of GDDR6 memory configured along a 256-bit wide bus interface. It’s easy to tell that this is still an engineering sample considering that it has no official branding attached to it whereas the ARC A380 has already shown up in SANDRA with its naming scheme.
As for performance, the Intel ARC Alchemist flagship graphics card scored up to 9017 Mpix/s which is slightly above the NVIDIA GeForce RTX 3070 Ti that scored 8369.51 Mpix/s. The AMD Radeon RX 6800 scores 10,607.29 Mpix/s in the same benchmark while the Radeon RX 6700 XT scores 7910.91 Mpix/s. The Intel ARC A380 scored 2956.10 Mpix/s. So we know that the flagship is over 3 times more powerful than the entry-level DG2-128 graphics card which should be correct considering it packs 4 times more cores.
Here’s Everything We Know About Intel’s ARC Alchemist Graphics Lineup
Intel will have at least three configurations of ARC Alchemist GPUs ready for launch in Q1 2022. These will include two configurations based on the top 512 EU die and one configuration based on the 128 EU die. Although there are more GPU configs that we have seen in leaks, it looks like those may be used in future products though that cannot be confirmed. So let’s start with the top-end configuration.
Intel Xe-HPG 512 EU ARC Alchemist Graphics Card
Intel Next-Gen Xeon CPU Rumors: 10nm Emerald Rapids, 7nm Granite Rapids, 5nm Diamond Rapids Detailed, Up To 144 Lion Cove Cores by 2025
The top Alchemist 512 EU (32 Xe Cores) variant has just one configuration listed so far and that utilizes the full die with 4096 cores, 256-bit bus interface, and up to 16 GB GDDR6 memory featuring a 16 Gbps clock though 18 Gbps cannot be ruled out as per the rumor.
The Alchemist 512 EU chip is expected to measure at around 396mm2 which makes it bigger than the AMD RDNA 2 and NVIDIA Ampere offerings. The Alchemist -512 GPU will come in the BGA-2660 package which measures 37.5mm x 43mm. NVIDIA’s Ampere GA104 measures 392mm2 which means that the flagship Alchemist chip is comparable in size while the Navi 22 GPU measures 336mm2 or around 60mm2 less. This isn’t the final die size of the chip but it should be very close.
NVIDIA packs in tensor cores and much bigger RT/FP32 cores in its chips while AMD RDNA 2 chips pack a single ray accelerator unit per CU and Infinity Cache. Intel will also have dedicated hardware onboard its Alchemist GPUs for Raytracing & AI-assisted super-sampling tech.
The Xe-HPG Alchemist 512 EU chip is suggested to feature clocks of around 2.2 – 2.5 GHz though we don’t know if these are the average clocks or the maximum boost clocks. Let’s assume that it’s the max clock speed and in that case, the card would deliver up to 18.5 TFLOPs FP32 compute which is  40% more than the RX 6700 XT but 9% lower than the NVIDIA RTX 3070.
Also, it is stated that Intel’s initial TDP target was 225-250W but that’s been upped to around 275W now. We can expect a 300W variant with dual 8-pin connectors too if Intel wants to push its clocks even further. In either case, we can expect the final model to rock an 8+6 pin connector config, The reference model is also going to look very much like the drone marketing shot Intel put out during the ARC branding reveal. That reference design was leaked a while back by MLID too. There’re also talks about a custom lineup being worked upon by Intel’s AIB partners.
News Source: TUM_APISAK
The links above are affiliate links. As an Amazon Associate, Wccftech.com may earn from qualifying purchases.
For latest tech news in your inbox, once a day!